Right before turning thirty, Rudolph Delson left law to compose and complete his first novel Maynard and Jennica which, like its author, proved to be ambitious.

Both Ugly Duckling Presse and Portable Press at Yo-Yo Labs call special attention to the craft of bookmaking: their publications prominently feature handmade pieces and place a strong emphasis on visual elements. These presses provide just two examples of the large body of unique work being produced by an increasingly populous independent publishing community.

Fiction: Pain Under a Microscope

Poet, novelist, activist, and essayist Ana Castillo had been addressing issues of racism, feminism, and Chicana identity with her award-winning writing (her first novel, The Mixquiahuala Letters, won the American Book Award in 1986) for nearly three decades since moving from Chicago to New Mexico in 2006. It wasn’t too long after the author relocated that she began to wonder what everyday life would be like for those who live on the other side of the Franklin Mountains, a beautiful range close to the border that Castillo stares at—from her kitchen window in a presumably nice home in a presumably affluent neighborhood. We can assume that Cabuche, the rough border town she intimately envisions in her seventh and latest novel The Guardians, manifests on the other side. 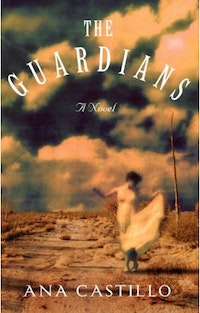