The Right to Party

A few years ago, when I was a reporter in Chicago, I did a story on a phenomenon I called "The New Prohibition." The city, for various reasons, was shutting down neighborhood bars. In poor black neighborhoods, taverns were the targets of moralistic church crusaders. In gentrifying neighborhoods, they were the bête noire of noise-averse yuppies. What was wrong with Mayor Daley? I asked. Didn’t he want Chicago to be fun anymore? 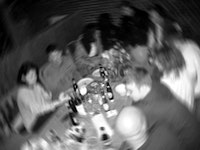