I had planned to review Mark Hagen’s 2013?: A Doomsday Day Planner at least six months ago—in other words, before 2013 began. It just never turned up at my door. December 21, 2012, came and went without a noticeable Mayan recalibration of the cosmos, and I didn’t dwell much on the missing book, which, after all, was predicated on the idea that you probably weren’t going to need it. The planner’s (non)existence, for that very reason, felt like an elaborate joke unto itself. 2013? Get real. 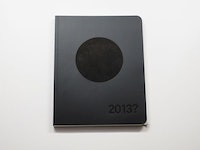