Pity and Terror in the Parlors of the Mighty

"I’m really, basically, a homebody," insists Jiang Qing, a.k.a. Mrs. Mao Zedong, in the interview that opens Anne Washburn’s play The Ladies. "I’m a very ordinary girl who became a movie star." The claim is disingenuous, but tantalizing; in a play by Anne Washburn, whose work makes a study of exposing the malevolent within the mundane, a character’s proclamation of ordinariness is a promise of extraordinary things to come.

A Playwriting Workshop with Mac Wellman, Errant Aphorist of the Avant-Garde

Split the atom and the energy pours out; split the well-made play and the same thing happens, or so goes the theory behind a Mac Wellman “non-conventional playwriting" workshop, one of which recently wrapped its four-day run at the Flea Theater in Tribeca. For two weekends in a row, Wellman sat at the end of a folding table in the theater’s dimly lit mainstage space, presiding with impish dignity over a group of twelve playwrights who came to have their assumptions about theater upended, if not blown to bits.

By Madeleine George and Erin Courtney

Erin Courtney, the 12th playwright to assume artistic leadership of 13P, the collective of playwrights devoted to producing their own work, talks with Madeleine George about her upcoming production, A Map of Virtue.

It’s a truism of theater that the Greeks get revived during wartime. Those stark, sometimes histrionic plays that torment freshmen in peacetime Western Civ classes begin to feel painfully urgent when we watch the world around us devolve into a violent comic strip of good guys and bad guys. 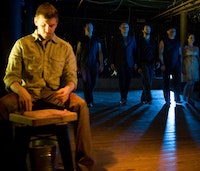