Katsushige Nakahashi’s Zero Project (2000 – ) involves a curator leading a group of volunteers in the construction of a full-scale World War II Japanese Zero fighter plane. The construction materials are 25,000 photographs taken from a scale model of the plane. These are held together by a lot of cellophane. Upon completion of the three-dimensional plane, volunteers carry the plane to a lawn or someplace and burn it. 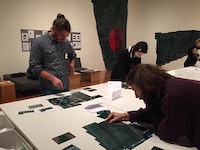