The King of Boredom

A great big book of graphical scores, sound poems and experimental performative texts arrived in my mailbox recently. Doings by Jackson Mac Low (1922-2004) is a massive—and massively important—tome for anyone interested in the history of 20th innovative poetry. 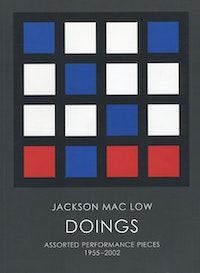 Robert Ashley: Music With Roots in the Aether

A Selection of the Kenny G. Letters

Presented here are some of my very favorite Kenny G fan letters.