from Who Among Us

by Mario Benedetti, translated from the Spanish by Harry Morales

Who Among Ustakes place in Montevideo, but this is merely circumstantial because the most prevalent element of this work is the psychological delving into each characters’ mind and not the monitoring of a social atmosphere.

From The New York Jail

by Plinio Garrido, translated from the Spanish by Harry Morales

Marco Aurelio Pieschacón is, without a doubt, a real hamburger eating champion. His record of eating a hundred and twenty five cheeseburgers in one sitting has not been surpassed by anyone in the borough of Queens.

Mario Benedetti was born on September 14th, 1920 in Pasa de los Toros, Tacuarembó Province, Uruguay. When he was four years old his family moved to Montevideo. 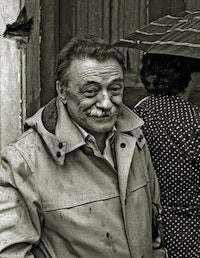 Exiles (A Man in a Lobby)

By Mario Benedetti and Harry Morales

I met Dr. Siles Zuazo in Montevideo twenty years ago, when he arrived in Uruguay as an exile (the word was pronounced differently then) following the triumph of one of the many military coups that have always corrupted the history of Bolivia. I had a few books published at the time and worked in the bookkeeping section of a large furniture company.

By Mario Benedetti and Harry Morales

The death of a friend (and more so when one is referring to someone as dear as Luvis Pedemonte) is always a heartbreak, a rupture. But when death is the culmination of his troubles in exile, and even if that death occurs in a location as fraternal as this one, the heartbreak has other implications, some other significance.