The 1935 drawing “To the Lynching!” by artist Paul Cadmus was for New York audiences a call to action. Completed for the NAACP-sponsored exhibition An Art Commentary on Lynching, the work moved beyond much of the era’s socially conscious art that advocated progress in response to adversity broadly defined in favor of protest art that demanded a direct response to explicit acts of injustice. 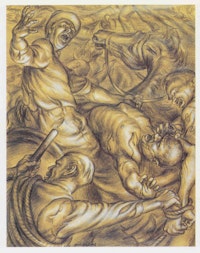