At the Anyway Cafe afterparty for the screening celebrating Raymond Foye’s Critics Page in the December 2014/January 2015 issue of the Rail, I asked him how he managed to put the whole section together in three weeks. 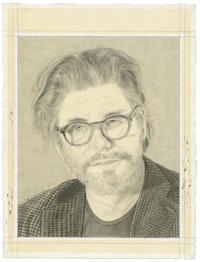 Paul Gulielmetti was an extraordinary lawyer who not only knew the law, he understood what was right. He loved downtown New York. 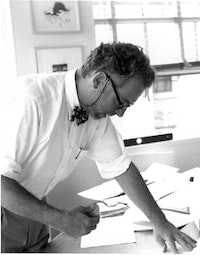 I started off in poetry, and the painting started about the time I met you, Bob, which was at Naropa University, like 10 years ago. And it started evolving into: How can poetry change? How can it move outside of just a poetry reading? How can you really bring it into different environments? 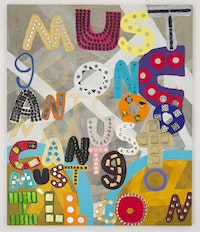 The pen, writing stories, and the camera, taking pictures. Stories turned to poems, pictures turned to videos. Now I’m putting them together.

We first met when Phong and Robert Storr paid a visit to our loft on Duane Street for a lengthy interview with my late wife, the painter Elizabeth Murray, on the occasion of her retrospective at MoMA, sometime in late September 2006. When Phong invited me to guest edit these Critics Pages, I wanted to turn the tables, so I invited Phong to my pad over the shop, above the Bowery Poetry Club, for a brief conversation about his love for poetry and spoken word. 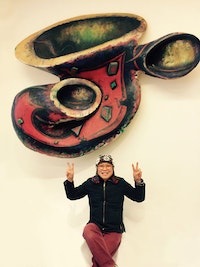 The Hammer of Justice

Awake & listen! Now hear this! / I was born in Texas, grew up in Kentucky, / High school in Hawaii, never graduated / In Utah, moved to New York, never left

Bob Holman’s two new books, The Unspoken and Life Poem, were written fifty years apart. You can order them from YBK Publishers.

Founder of the Bowery Poetry Club and the author of 17 poetry collections (print/audio/video), most recently The Cutouts (Matisse) (PeKaBoo Press) and Sing This One Back To Me (Coffee House Press), Bob Holman has taught at Princeton, Columbia, NYU, Bard, and The New School. As the original Slam Master and a director at the Nuyorican Poets Cafe, creator of the world's first spoken word poetry record label, Mouth Almighty/Mercury, and the Artistic Director of the Bowery Poetry Club, Holman has played a central role in the spoken word, slam and digital poetry movements of the last several decades, work that continues with the founding of Bowery Poetry Studios, where he hosts the poetry podcast "Mouth Almighty." A co-founder and co-director of the Endangered Language Alliance, Holman's study of hip-hop and West African oral traditions led to his current work with endangered languages. His film, "Language Matters with Bob Holman," winner of the Berkeley Film Festival's Documentary of the Year award, was produced by David Grubin and aired nationally on PBS.

Bob Holman’s two new books, The Unspoken and Life Poem, were written fifty years apart. You can order them from YBK Publishers.

Right now it is 10am and I am sitting alone in the Kotzebue Heritage Center Meeting Room, letting the workshop that will fill this space tonight spill out of the walls and exhibits. The possibilities!