The art historian and psychoanalyst Laurie Wilson has written a new biography, Louise Nevelson: Light and Shadow, which is being published this month by Thames & Hudson. Born Leah Berliawsky in 1899 near modern-day Kiev, Ukraine, Nevelson came to the United States with her family in 1905. They settled in Rockland, Maine. At age twenty, she entered into an arranged marriage to a New York millionaire. Ten years later, she left him, giving up her young son and social status to become an artist. After struggling in poverty for three decades, she finally gained wider recognition at age fifty-nine and was celebrated for her groundbreaking large-scale abstract sculpture. 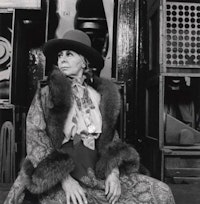