The Hypothesis of the Stolen Painting

In 1978, the Chilean filmmaker/writer, Raúl Ruiz, was commissioned by French television to make a documentary on the painter/writer, Pierre Klossowski. Over the course of its production, Ruiz abandoned this documentary to make The Hypothesis of the Stolen Painting—a feature-length film which smuggled Klossowski’s theories of art into a neo-baroque portrait of an imaginary nineteenth-century artist, Fredéric Tonnerre, whose exhibition of a series of seven paintings caused a major yet mysterious scandal in the Parisian court. 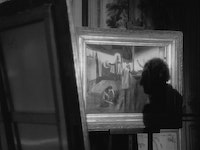