Straddled between 19th-century France and 21st-century America, The Arcades: Contemporary Art and Walter Benjamin at the Jewish Museum is an enormously ambitious undertaking. An elaborate visualization of Benjamin’s monumental last work of writing, the exhibition expands upon his critique of Parisian culture and politics during the 1930s to invite comparison with today’s America. 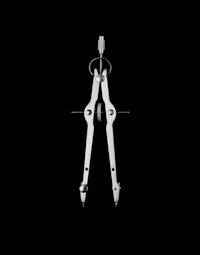 One thing Documenta curator Adam Szymczyk should without doubt be credited for is bringing Documenta to Athens. By situating half the exhibition in one of Europe’s presently crisis-plagued countries—in the midst of discussions about migration policy, continental cohesion, and moral obligations—an urgency that it could not have developed in Kassel alone is attained, and harnessed. 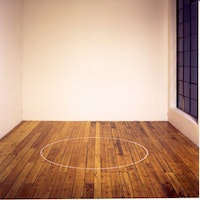 Sounds of life fade away as you, along with four museumgoers and one museum guard, pass through three successive off-white chambers separating the Guggenheim’s rotunda from Doug Wheeler’s PSAD Synthetic Desert in the topmost tower gallery.

Lygia Pape A Multitude of Forms

Months of political unrest and now the question of art—its role, responsibilities, and possibilities—weighs on New York. Addressing both currents, the Met Breuer houses Lygia Pape: A Multitude of Forms, the first major retrospective of the artist in the United States. 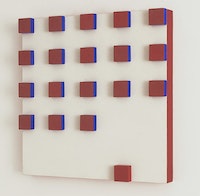 Fire portends calamity. It carries at its core the mission to obliterate all that is in its way. It is inherently destructive and regenerative, making it ultimately an oxymoron. 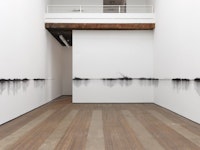 Recently acquired by the Museum of Modern Art, Ian Cheng’s epic “live simulation” trilogy, Emissary (2015 – 17) is installed in its entirety for the first time at both MoMA PS1 and live-streamed on Twitch, a social video platform for gamers.

Threads of Fire and Water and Gold

The roving art space We Buy Gold, which Joeonna Bellorado-Samuels opened in Bed-Stuy in March, is successfully managing a tricky balancing act: it is seriously and coherently embedded in its space and moment, even as it resists barricading itself into a particular corner.

In part of Postcommodity’s takeover of Art in General’s new Dumbo space, a single photograph hangs at the end of a long gallery, spotlit and seemingly suspended in darkness.

Jimmie Durham At the Center of the World

Midway through Jimmie Durham’s current retrospective at The Hammer Museum, a 1992 sculpture titled The Guardian (free tickets) offers the following advice to viewers: “May I suggest that we imagine systems in opposition to any concept of opposites?” 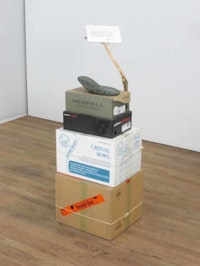 In the original title of Max Ernst’s extraordinary bronze statues of 1967, Corps enseignant pour une école de tueurs (Teaching Staff for a School of Murderers), there is no specific reference to a “Big Brother.” 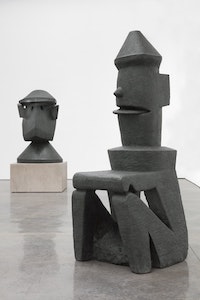 Stephen Irwin Check to see if still dead inside

The first posthumous solo exhibition in New York of the late, Louisville-based artist Stephen Irwin (1959 − 2010), is so restrained it makes your teeth hurt. 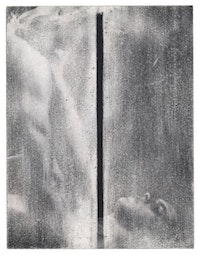 Eleven tapestry-like painted objects hang from the gallery ceiling in symmetrical arrangements, delineating pathways, establishing something of a community.

Increasingly, the Irish-born, New York-based Sean Scully is viewed as one of the most gifted artists of his generation. Likely best known for the painting series “Wall of Light,” Scully has practiced a variation on the New York School, giving it a European sadness as well as continuing the American penchant for expressiveness. 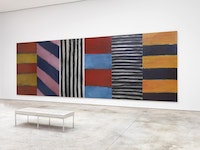 The archeological record from the Qin and Han dynasties in Age of Empires, which includes over 160 artworks, should be a revelation to anyone who hasn’t had the opportunity to visit China’s leading regional museums in the last twenty-five years. The period it covers, roughly contemporaneous with the rise of Rome up to its imperial heyday, laid the foundations for China’s imperial system that managed to endure, in successive iterations, for another staggering 1700 years. 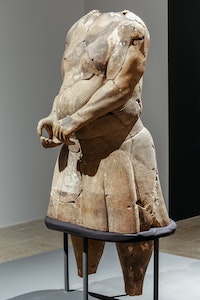 Norwegian painter Peder Balke (1804 – 1887) is unrepresented in the Metropolitan’s collection, but owned in depth by longtime supporters of the museum, The George Hearn Trust and Asbjørn Lunde, who have together lent thirteen of seventeen works by the artist in this one-room sparkler of a show. 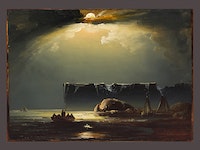