by Hassouna Mosbahi, translated from the Arabic by William Maynard Hutchins

They suddenly seized control of all the media—radio, television, and print—till I felt these men with scowling faces, long black galabias, and dusty, unkempt beards dangling down to their breasts were pursuing me nonstop, allowing me no peace of mind whatsoever. They walked the streets with me, whether these were deserted or crowded. They patrolled the public gardens and roamed through the packed stores I occasionally visit to purchase supplies. They were with me too in the depressing gray office where I work for an insurance agency.

from Delusions of Being Observed

Conversation In The Palace Of Ch’ien-Lung

by Alfred Döblin, translated from the German by Chris Godwin

The session of the High Council which convened on the morrow was unable, through an external circumstance, to give consideration to the Torghut question. Once certain personnel matters which had lain pending for too long had been dealt with, the Emperor was called away to view, together with the Chief Overseer of Eunuchs, the young ladies who had been chosen to replenish the Imperial harem. Seven Manchu beauties of distinguished family trembled on rugs in the vestibule of one of the Imperial houses of women. The Minister named each of them to the Emperor, who nodded thoughtfully. As each was named she stood up, let fall her milk-white veil, exuded the scent of choice perfumes, lifted her gaze.

by Monica Sarsini, translated from the Italian by Maryann De Julio

When the war was over your grandfather parted from the company and I went to help him in the shop, he needed somebody, if on the spur of the moment a client came, or for the pay for the workers. I understood accounting, I was ten years with a bookkeeper, he didn’t want to do anything, he had me do everything but he taught me.

The "Game" of Cat and Mouse

During the summer of the mouse infestation, my roommate's cat got very good at catching mice. 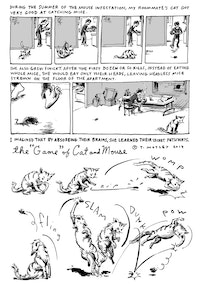