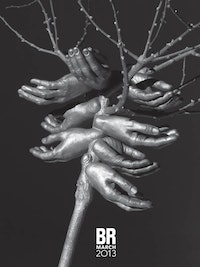 When I was asked to be a guest editor for this section of the Rail, I sent the following proposition/question to a number of writers:

Portrait of Nancy Princenthal. Pencil on paper by Phong Bui.

When Harold Rosenberg wrote, “A contemporary painting or sculpture is a species of centaur—half art materials half words,” he was responding to the Minimalism and dawning Conceptualism of the late 1960s. By the early 1980s, it was a commonplace that art was being compelled to find new footing in an image world inundated by a cataract of commercially produced and broadcast pictures. It now seems clear, however, that the digital connectivity which followed has created a global community at least as prolix as it is visually saturated. In an art world distinguished above all by endless talk—much of it generated, it should be said, by artists—it falls to such astute critics of relational esthetics as Claire Bishop to remind us of the importance of “drawing attention to the work of art as an intermediary object, a ‘third term’ to which both the artist and viewer can relate.” That we need such advice suggests the pass to which we’ve come. Verbal language has, arguably, gotten the jump on visuality.

The questions raised are: Do you agree that this has happened? If you do, do you think it matters? If it does, how can it be remedied—how can writers give art more breathing room?

I wanted to hear from writers who were primarily artists, because they live these questions in their work. But it honestly didn’t dawn on me until the responses started coming in that everyone I’d asked (including, as it happens, a few people who weren’t able to participate) was, specifically, a painter. So I suppose what follows is not just a roundup of ideas about the relationship of art and words but also a series of reflections on painting and its kinship to writing—one that incidentally opens the question of why painters and not, say, video artists or sculptors figure so prominently among art critics. The answer will have to wait. In the meantime, I’d like to thank the contributors for their generosity in submitting these thoughtful and provocative essays. Several responses came from regular contributors to the Rail, adding significantly to the liveliness of the discussion. I’m very grateful to them as well. It seems that Rosenberg’s centaur can still raise some dust.

By Hunter Blu and Krista Gay

Can language solve our problems as young Black people, and if so, what form(s) of language?

The thread between structure and consciousness weighs on the mind of Sebastián Maria, the Colombian-American composer, producer, and DJ based in New York City.

Georg Büchner and the Missing Language

Georg Büchner was a rising star in Germany’s 19th century literary scene. A prolific and thought-provoking writer, he was a counterculturalist whose life was cut short; he died at age 23. Two centuries later, writer Sam Kahn explores Büchner’s impact, and how he may be the missing link in the history of theater.

Lauren Russell is the author of Descent (Tarpaulin Sky Press, 2020), winner of the Poetry Society of America’s 2021 Annie Rabinowitz Award, and What’s Hanging on the Hush (Ahsahta Press, 2017). She was a 2017 NEA fellow in poetry and is an assistant professor in the Residential College in the Arts and Humanities and director of the RCAH Center for Poetry at Michigan State University. Russell wrote an earlier draft of this sequence at a residency at Passa Porta, International House of Literature, in 2019. “I got stuck in the pipe” was originally published in Passa Porta’s magazine.