I See Myself In You

A sense of not-knowingness emanates from the bare and undulating bodies within The Smell of Want, a work by the Irish duo Fitzgerald & Stapleton, which premiered at the Abrons Arts Center in October.

Rarely do I leave a performance feeling the way I did on this October night, walking away from Heather Kravas and Jeremy Wade’s shared program at Danspace Project. I felt violated. 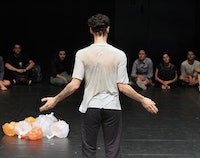 It is telling to me that Rachid Ouramdane’s Ordinary Witnesses, which had its New York premiere at New York Live Arts in October, begins not with the sense of sight, but with a demand upon its audience to listen.

The award-winning tap dancer Derick Grant, 38, is a veteran of Broadway and international stages. He’s also among today’s tap vanguard—improvising, choreographing, producing, and sharing his expertise with beginner and professional students alike. 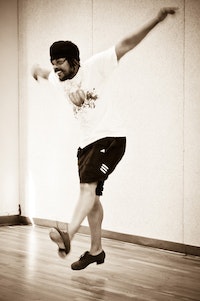 A Tale of Two Dances

When I first read the lineup for the Brooklyn Academy of Music’s Next Wave Festival, I saw that it included Taiwan’s Cloud Gate Dance Theatre and Beijing Dance Theater, performing only a week apart. Having spent time in China, I immediately pitched a story which involved reviewing both shows and discussing the ways in which modern dance has developed and been interpreted in Asia. Given current political and historical tensions, it was hard not to want to see these two shows together.

omeday, we will be able to talk about Irish dance without the words Riverdance or “Michael Flatley” entering the conversation. We’re not there yet. But Colin Dunne is bringing us closer.