Weird War: In the Belly of the Beat

In strange and sinister times like these, it’s not surprising that America’s funkiest indie-rock band has a name like Weird War. 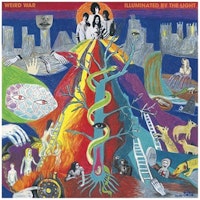 Untouchable Is Something to Be: The Rise and Continued Rise of Against Me!

I’ll never forget the feeling of shaking Against Me! drummer Warren Oakes’s hand as he pressed through the crushing crowd toward the front doors of CBGB. We locked eyes for half a second and I called out to him over the roar: “FIVE YEARS!” He smiled, or maybe shook his head—hard to tell what’s going on behind a beard like that. Then he had to go inside and I, ticketless, had to go home.

The Double: Loose in the Area by Fred Cisterna

I know this older guy who follows new bands but instantly dismisses 99% of them. When he heard one hotly hyped recent CD, he deadpanned, “I’m glad these young men have found something to do with their excess energy.”